Journal of the Optical Society of America B 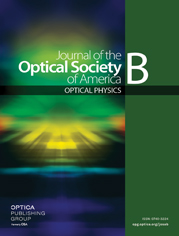 Journal of the Optical Society of America B

Journal of the Optical Society of America B Feature Announcement

The Journal of the Optical Society of America B (JOSAB) is planning a feature issue on cutting-edge research in ultrafast phenomena and terahertz waves in connection with the International Symposium on Ultrafast Phenomena and Terahertz Waves (ISUPTW). Established in 2002, this biennial conference is devoted to strengthening collaboration among researchers and promoting development in the science and technology of ultrafast phenomena and terahertz waves. ISUPTW 2020 will be held in Chengdu, China and will bring together researchers from all over the world to showcase their newest achievements and discuss future developments. The purpose of this feature issue is to highlight these latest developments in both fundamental science and practical applications.

Over the lifespan of the symposium, the field of ultrafast phenomena and terahertz waves has progressed steadily, partly due to the development of new tabletop ultra-intense lasers and laser/accelerator-based terahertz sources. These new sources reveal new ultrafast phenomena in physics, chemistry, and biology, and enable new diagnostic methodologies (spectroscopy and imaging) spanning terahertz, ultraviolet, and X-ray regimes. Meanwhile, the flexibility in methodologies enables applications in fields such as solar energy, quantum information, and optoelectronic devices.

Topic to be covered include but are not limited to:

Please prepare manuscripts according to the author instructions for submission to JOSA B and submit through Prism's manuscript submission system, specifying from the drop-down menu that the manuscript is for the feature issue on Ultrafast Phenomena and Terahertz Waves.